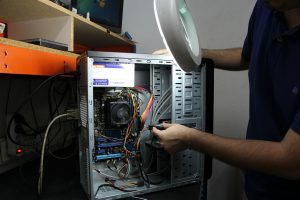 The components of a general desktop are going to be discussed here.

All in ones, minis and laptops still have the same components, but are on a smaller scale or may have integrated parts to compensate.

Starting off with the computer case, the case holds all of the components together. Without it there would be just a pile of parts.

There are many types of cases. Some are for home theater systems and made to fit in with your stereo equipment keeping that same size and form factor. There are gaming ones which are made for max cooling to keep their over clocked systems cool. There are totally clear acrylic cases that light up and just look neat. There are mini cases to take up as little space as possible. And the list goes on.

Moving on to the next component is the power supply unit or PSU. These are measured in watts and start out at around one hundred watts and go to the thousands. Generally more powerful and bigger the components are, the bigger PSU needed.

Next is optional currently, but in the past was a necessity-a optical drive. Floppy drives were used before CD drives, but now more common is a DVD drive or even Blue-Ray drive. The main purpose is to load software, but it can be used for anything applicable such as playing music, videos or games. The reason why it is optional currently is because now you can load your software via USB, or download it. This is becoming more common.

Next up is the hard disk drive or HDD. Again, this can be replaced by a solid state drive or SSD. The main purpose is to hold any and all data on the system. The operating system is held here along with any programs and any data that may be from the user or users.

The next component is the central processing unit aka CPU or processor. The CPU is what a lot of people refer to as the brain of the system. This is where all the processing happens, or where all the tasks become competed. You give the computer the command and the CPU makes it happen.

There are two main companies in the computer industry that make CPUs. AMD and Intel you have probably heard of them from commercials.  Intel seems to be more sought after claiming their products are better. AMD doesn’t advertise as much they are more for bringing that same or competitive power at a better price. Either way, they are both still good products.

The CPU and RAM are the biggest factors in performance. Contrary to what many perceive for some reason, it is often believed a bigger HDD will increase your computer performance. This has nothing to do with performance.

Next on the list of components is a video card. A lot of computers have them integrated, which means built in to the mother board or built in to the processor. Even if it does not look physically present, it still exists. This includes a graphics processing unit or GPU and its own RAM or shares RAM with the system. Like the CPU, the GPU accomplishes tasks, but these tasks are what you see on the screen or what is being displayed. There are many types of video cards and several different connections for video cards. They generally do the job of displaying what is seen on the screen. Again the bigger and more amount of RAM with the video card, the better the performance.

That brings us the next component – the screen or monitor. Generally they are liquid crystal displays or LCDs, these have simple job of displaying what the computer signal gives it.

Another component is speakers. Obviously its job is to project the sounds that the computer makes. The mic either records you or sounds to the computer. And finally the keyboard and mouse is used to control the computer.