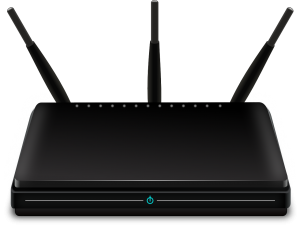 When there are multiple computers that are connected to each other, it is considered a network.

There are several different topologies of networks, some are peer to peer or P2P or server client.

A peer to peer network means that everyone on that network is generally equal as far as rights go, which means each computer on the network sets up its own rules for sharing, or not sharing, with each other. In a server client network, the server generally sets all the rules of sharing, permissions, access and communicating.

Whether it be with read and write accessibility, or just able to login into a specific machine,  server client is generally used in a corporate or more professional environment where dedicated rules and protocols are necessary. Peer to peer is generally used anywhere else.

This subject goes on and on but we will discuss those topologies briefly in order to just be able to identify the differences.  And to know that in most home or small office networks, they are generally using peer to peer networking topology.

First, the components of a home network would generally include a modem, and a router. Currently, the router is usually a wireless router to allow wireless devices to have access to the internet.

The modem is the component that provides the link to the internet from your internet service provider or ISP.  In this area, the main ISPs are Comcast and Century Link. Most of the newer modems are actually combination router and modem.

There are many types of routers and since wireless became popular, there is even more. Some of the components used in modern networking are routers, access points/gateway, wireless routers, switches, hubs, wireless cards or adapters, cable, nic (network interface card), PowerLine adapters, range extenders, POE (power over ethernet) routers, POE switches and surge-protecting power adapters.

A router takes one internet connection and creates the possibility of multiple computers or devices to also connect to the internet using that single connection.

Generally a router will perform the job of DHCP or Dynamic Host Configuration Protocol.  Which this job is to give out IP addresses to each of the computers or devices that are on the network. In a server client network a lot of the time the the server does this.

When there is a wireless router in place, in addition, it is also broadcasting a wireless signal for computers or devices to connect wirelessly.

A switch is used with the wired part of a network and does almost the same job as a router. The difference is that it does not provide IP addresses. In order for a switch to work properly, or for there to be connectivity in a network with a switch, a DHCP device needs to be in place on the network.

An access point/gateway generally does just that. It is different from a router because it doesn’t have multiple ports like a router. Usually used with a switch or a hub.

Also there are wireless access points/gateways as well. Hubs are just like switches. They generally are DHCP but we have found the difference between them and a switch, is any port on the hub can be the up link instead of a specified port.

Wireless cards and adapters are installed into computers usually desktops to become wireless capable. The different forms these are PCI, PCI express, USB and for laptops the mini PCI.

It is usually desktops, because laptops currently already have them installed. Nonetheless, if one on the laptop fails or breaks, it can either be replaced or substituted by a USB version.

The cable evolved with modern networking is generally ethernet cables. These consist of 4 pairs of wires twisted together. Throughout the cable, someone wrapped in braid coil of copper wire to prevent and insulate from any attenuation or interference.

The cable can be regular which consists of speeds of 10/100 mbps (megabits per second)  or gigabit cable which is 10/100/1000 mbps. Depending on the protocols or commands provided by the devices on the computer, the gigabit cable can go 10 mbps, 100mbps, or 1000 mbps.

Also, to reach these speeds, a gigabit router, switch, hub, access point and/or gateway must be used.

Next up, NICS or network interface cards, in the unlikely event that a computer doesn’t have a network plug, these are added to give a computer the capability to connect to a network. These also have variation of having gigabit speeds. They come in PCI, PCI Express and USB connections.

Power-line adapters are a great tool when running cables is too difficult or out of the question. It provides network connectivity through your already existing power plugs.

These come in different speeds as well but we don’t think is quite gigabit compatible just yet. Range extenders are just what they say, but with wireless only, they extend the wireless signal further. They basically repeat a existing signal.

Recently newer type of devices have came about POE routers and wired devices. They do the same as the others but also provide power to devices in the same ethernet cable. No new cable needed, just the device and receiving device has the capability.

​Generally these are used for camera systems, so that only one cable is needed to run to the cameras. Surge protection here in Florida is very important because of how many lightning strikes occur.  When networking, we strongly recommend that any outside connection, powered or not, is surge protected.